Samba is an open source implementation of the file and printer sharing protocols used by Windows networks.

These are known as the Common Internet File System (CIFS) and Server Message Blocks (SMB). Samba can be used in a number of different ways. Examples include, integrating Unix/Linux servers into Windows networks or in enabling Linux servers to act as Active Directory domain controllers.

Erion Ltd has a long history of working with Samba on many different platforms in a wide variety of roles. Our consultants have an in-depth knowledge of the operation of Microsoft networks and the internals of Samba.

At Erion we have worked with many of the worlds leading IT companies on Samba, providing training and consultancy.

Erion leads the world in IPv6 solutions for Unix and Windows Integration. We work closely with the leading solution providers in this area and have a wide experience of the relevant technologies. Erion has worked closely with the Samba Team to IPv6 enable Samba3, Samba4 and the Linux CIFS client. 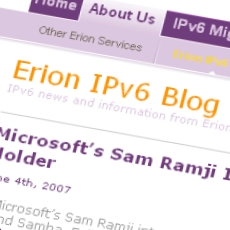